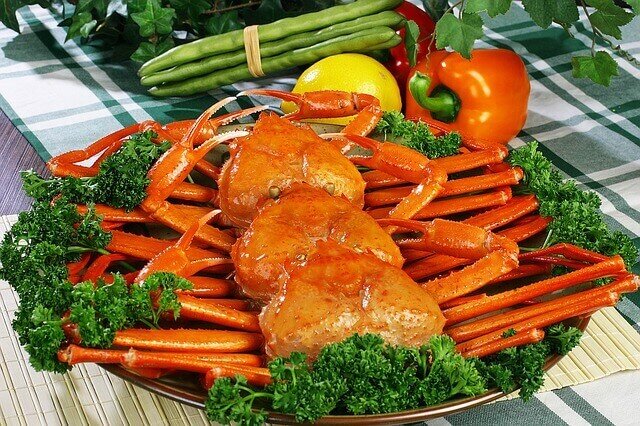 Catching, cooking and eating crabs is a major part of the Chesapeake Bay area tradition. It’s all been done in essentially the same way for centuries. The best part is that you can do it all yourself—catch your own crabs, steam them or make them into crab cakes and eat them on your own deck. Here is everything you need to know to enjoy crabs.

Along with oysters, the Chesapeake Bay blue crab, so-called because of the rich blue color along the male’s claws and legs, is the most sought after Bay shellfish. Translated from the Latin, the blue crab’s scientific name—Callinectes sapidus—means ‘beautiful savory swimmer.’ Crabs were an important food item for both Native Americans and English colonists. They were so prevalent that they were once considered a nuisance that clogged the nets of commercial fishermen. Large blue crab fisheries have existed in the Bay area for at least 100 years.

Catching Crabs
There are several ways to catch crabs. Originally, people used hand lines and dip nets. The first large scale commercial catches were done with trot lines, long baited twine. After the crab pot was invented in the 1930’s, most crabbers abandoned the trot line. If you want to catch your own crabs—fun for the children—the traditional way is to drop a line with chicken necks on it into the water by a pier piling. Crabs are attracted to the bait and you can snatch them from the water with a net.

Both recreational and commercial crabbing are done with crab pots, wire mesh baskets with funnel shaped entrances, wider on the outside than inside. Crabs are attracted to the bait and enter the trap, unable to get back out. Crab pots can be purchased all over the Bay area. All you need for your family is one.

Cooking Crabs
Crabs can be fried as soft shells or made into crab cakes but the most popular way to cook crabs is to steam them. To steam crabs, you need a large steamer placed over a stockpot of beer and boiling water. Put a layer of crabs in on a screen, sprinkle them with seasoning (Old Bay is the one most often used), add another layer of crabs and seasoning and continue until the steamer is full of crabs. Put the top on the steamer and steam them for 20 minutes or so. When the crabs have all turned a bright red-orange, they are ready to eat.

A soft shell crab is one that is molting, shedding its old shell for a larger new one. During the period before the new shell hardens, the crab can be fried. If you buy frozen soft shells, they have most likely already been cleaned, but if your crabs are fresh, you’ll need to dress them yourself. The first thing to do is to use an old pair is scissors to snip them just behind the eyes across the front of the shell, killing them instantly. Next, lift up each half of the top shell and remove the lungs (feathery gills). Turn the crab over and pull off the lower hinged plate (the part with the point) at the bottom of the shell. Now they are ready for the pan.

Dip a crab in hot milk and then drag it through a bowl of seasoned flour before placing it in a frying pan with butter and a little oil. Be sure the butter and oil is very hot; the crab should be almost flash-fried. Cook it for two to three minutes, flip it once and cook for another two to three minutes and it’s done! You eat the whole crab, shell and all. Enjoy!